This is going to be quick and concise.

Went to Vietnam for work. Flew into Hanoi. Besides stepping out of hotel for work,  I was mainly in the hotel. First impression of Hanoi wasn’t good. It is too noisy for me. The constant honking of vehicles on the road was unbearable. As such, I didn’t even felt like venturing out. So I was really glad the Melia Hotel is a nice one. 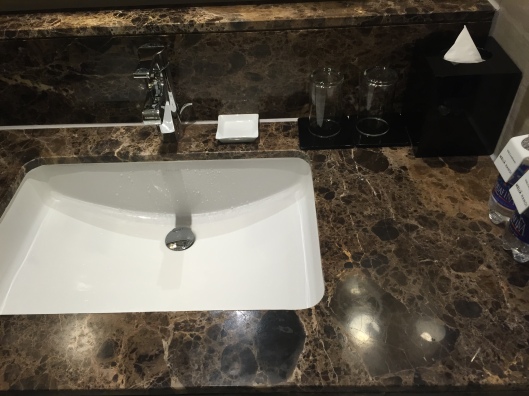 Reminds me of home! I was already homesick on my first day!

I was famished and decided to look for food in the hotel. And I got myself the famous pho from Vietnam.

So I chose the Melia because it has a pool which was great given that I had already decided to hole myself up in the hotel.

Dinner was at the hotel, but of course! I chose a different restaurant and got myself some phad thai. Then I decided I needed vegetables and ordered some.

And the servings were too big! When the phad thai arrived, I instantly regretted ordering the  vegetables.

Due to the horrible traffic in Vietnam, I had to wake up supremely early for work and that meant breakfast was too early an affair for me. So I skipped breakfast and could only wait for lunch. Lunch was at a noodle place near work and was rather forgettable.

For dinner, I went to the same Chinese/Thai restaurant in the hotel and ordered a claypot dish. With rice, it was filling.

After work the next day, I had to take a flight to Ho Chi Minh City. I had a terrible encounter in the taxi. At the risk of boasting, the driver kept saying I’m pretty and he kept trying to make a conversation with me. Unfortunately, or rather fortunately, I couldn’t really understand him. Then he started taking his phone out and tried to take videos of me! I was then really thankful for my long hair which hopefully blocked his view as I made sure to face the window.

Along the way, I spotted some interesting local works. 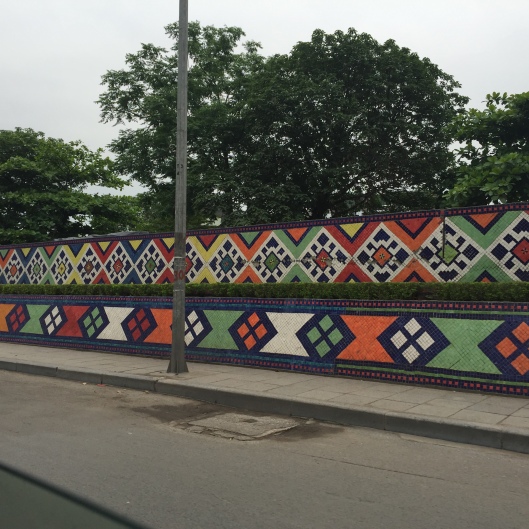 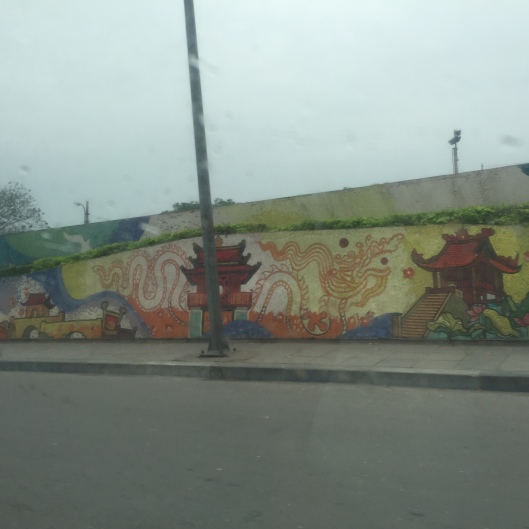 At the airport, again, due to early hours, I didn’t take breakfast and I was really hungry. I’m a hotpot lover and when I saw hotpot available on the menu, I went for it.

Can’t say it was the best hotpot I ever had but it wasn’t that bad.

When I reached HCMC, I decided it was much better than Hanoi. For a start, the traffic noise was not as bad as that in Hanoi. In Hanoi, the longest duration which I did not hear a honk was something like 3 seconds. But in HCMC, it was as long as 15 seconds!!! Which was a blissful 15 seconds! And HCMC seems more modern and cleaner than Hanoi, so I was actually tempted to walk around.

So after checking in and settling down, I decided to head out for some french food. Everyone keeps telling me to eat French food in Vietnam esp HCMC. So I asked the concierge for recommendations nearby and he wasn’t exactly sure. But after typing in his computer, he wrote down an address for me. He said it was just across the road, less than 10 mins walk away. So off I went.

But, a very big but, I had to cross a road. And I missed my opportunity to cross with a large group of pedestrians. And for some reason, it took a long time for people to gather for me to dare to try to cross the road. So while waiting, the sky got darker and I thought, what if I couldn’t cross the road on my way back to hotel? In 10 mins, when I still hadn’t managed to cross the road, I decided it was probably safer to head back to hotel and eat at the hotel. COWARD ME!

So dinner was of course, a western meal.

After dinner, I decided to check out the pool. Which was a cool stylish looking pool. I thought I try it tomorrow night. 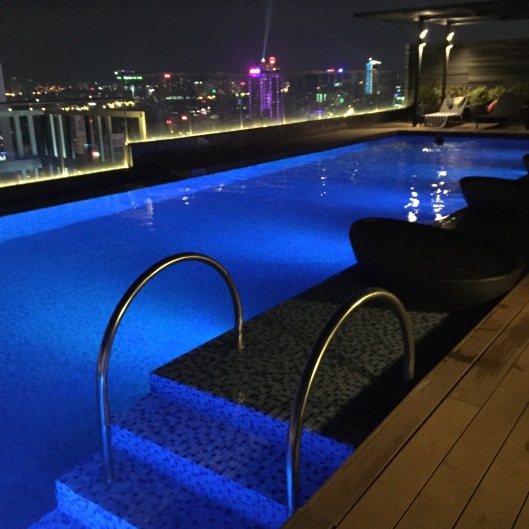 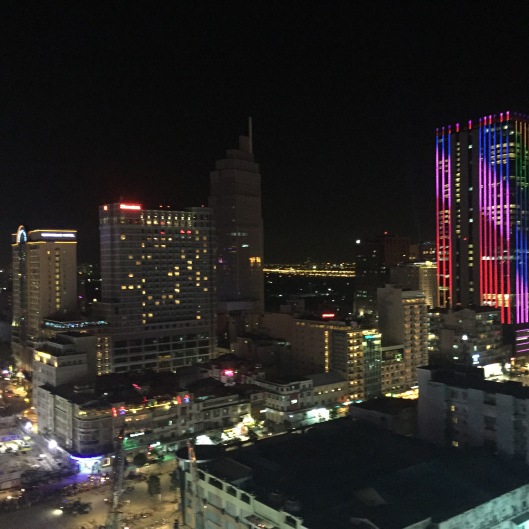 See all those bikes!

It was a new and a rather scary experience. I don’t like cars getting too close when I’m driving, and it’s the same when I’m on a scooter. But Vietnamese get really close to each other. When I thought it’s safe enough, I would whip out my phone to take some photos but the safe moment was usually in terms of seconds. So pictures are really badly taken.

I was like that guy, hanging on for dear life. 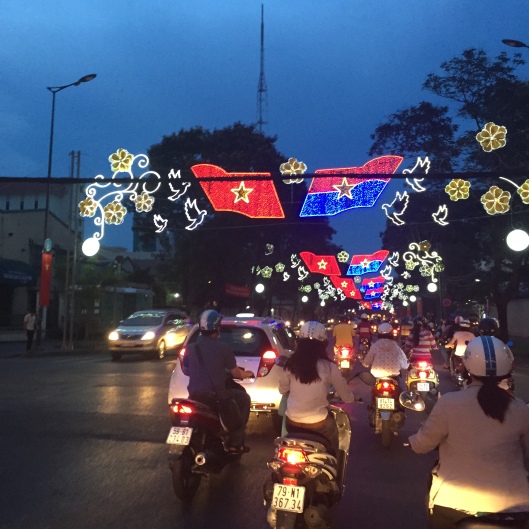 To be honest, dinner was not fabulous and my colleagues then brought me to eat street food – longan ice-cream.

I actually love street food. But Vietnam just doesn’t agree with my stomach.

This ice cream was just too rich with coconut cream for me. The longan was longan, nice and sweet but argh, I hate the coconut cream!

But I was glad to have a night out with my colleagues and it seems that Vietnam might be worth a revisit. Just not soon…..