So I was on my way to Boston on a business trip. The route of travel I had chosen was Singapore-London-Boston. The alternative would be something like Singapore-Frankfurt-New York-Boston. I absolutely refused to have 2 stopovers, so I took the former. Which took like 10 years off my life because of a 7 hours stopover in London.

I thought that instead of spending 7 hours in the airport, if transport permits, why not spend like 5 hours in downtown London? And I have a friend who is working in London, and it would be great to catch up.

I was lucky on my flight from Singapore to London as I was allocated the seat at the emergency exit aisle, which meant extra leg space. While I do not possess the longest legs, I loved the additional space I have to stretch. Very important to prevent deep vein thrombosis. Still can’t believe my company didn’t book me for business class!?!

All I can say about the flight was that it was longgggg. But as mentioned, luckily I had the seat with lots of leg space.

And then, I was in London! I was kinda excited to finally reach London and proceeded to the hand luggage storage area to store the hand luggage I had and proceeded to the high speed train area. I had purchased the tickets online for the Heathrow Express that transports one from the airport to downtown in 15 mins!!!! Thats very impressive timing! And there’s even free wifi on the train!!!

Initially I wanted to visit a few places of interest but I really had limited time. In the end, I decided I would just check Harrods out. My friend and his wife would also meet me near Harrods for a quick bite.

I had the problem of figuring out how to get to Harrods. Unfortunately, the Circle line that would be the most straight forward and easiest route was closed on this particular day!!! :angry:

From the map, I figured, since I had the time to spare, I could walk from a High Street Kensington tube station and walk past Hyde Park all the way to Harrods. On the map, this looked to be quite a quick walk. 😛 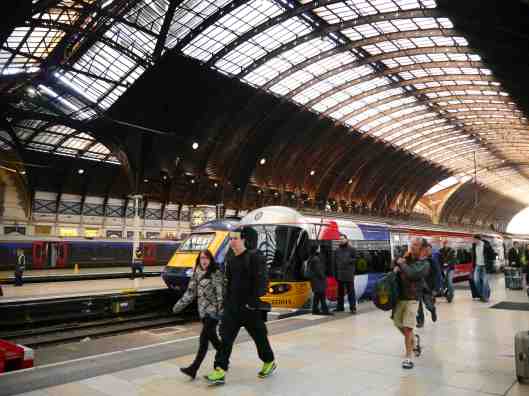 It was sooooo cold, even within the station!

And then I began to walk. 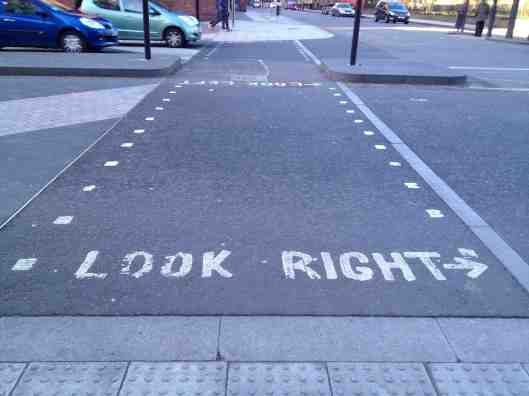 Instructions on the roads 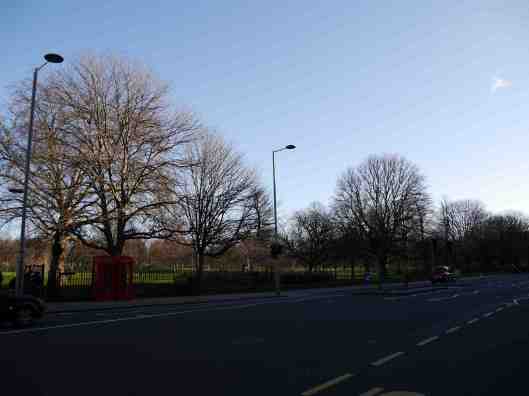 Hyde Park across the street

So I crossed the road and entered Hyde Park. 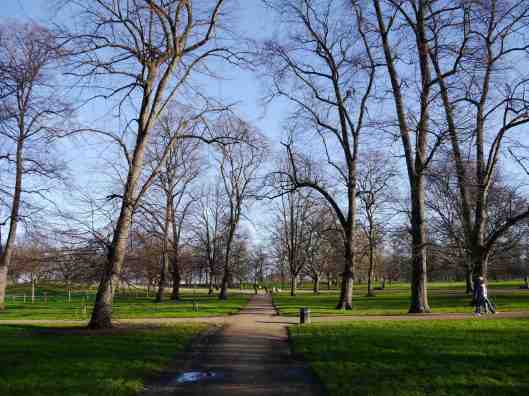 It was nice to be in a big park. I didn’t venture into the park but just walked down the park heading in the direction of Harrods.

It was a great day in London. Beautiful day! Lovely blue skies instead of the grey skies that I associate London with.

So along the way, I took pictures without any idea of what they are of. I admit, I didn’t read any travel guides on London once I decided that I would just enjoy myself at Harrods. 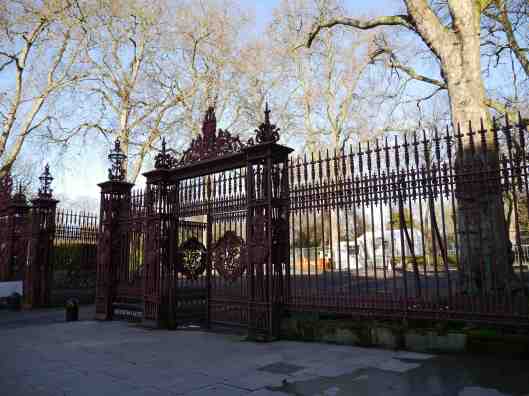 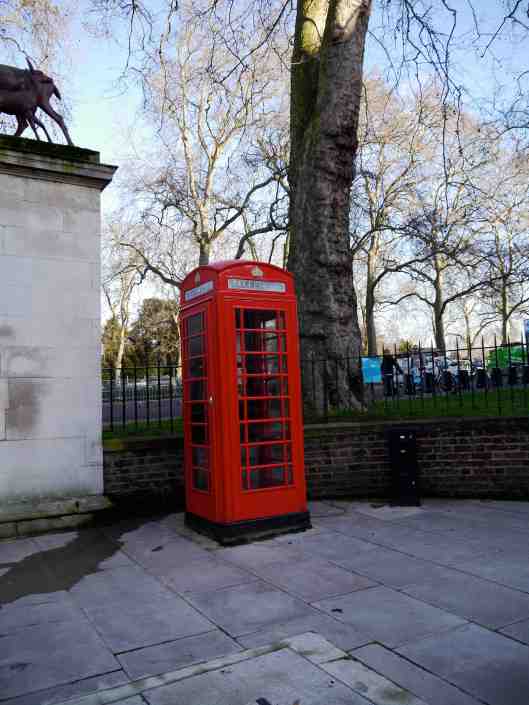 Famous telephone booth – are they still in use these days? 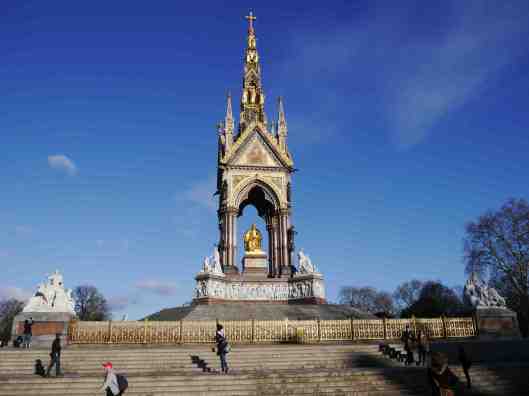 I gotta google this and find out what this is 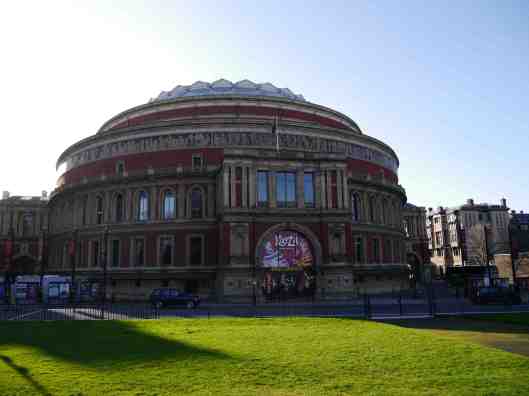 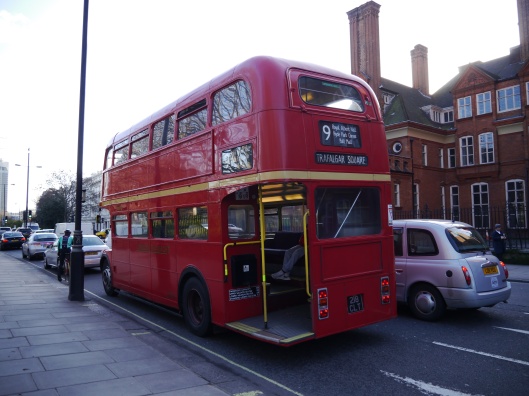 I gotta say this too – the names of places that I know of London, all come from Monopoly, with the exception of Knightsbridge (which came from a fashion source).

Oh, how I would love it if my husband was with me. He would enjoy the walk in this lovely weather.

And I walked and walked. I started to get tired and hungry and then I chanced upon this. 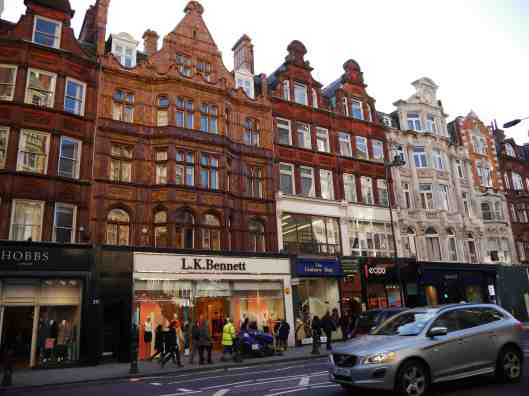 We have no L.K Bennett in Singapore and with all that hype on Kate Middleton, I was most inclined to take a look. I was really really tempted to get that pair of shoes but logical me took over the shopaholic me. Lucky the right me turned up!

And I walked and finally reached Harrods!

And I was so excited that I forgot to take a picture of the facade of Harrods.

Harrods seem huge! Once in, I just kept walking straight until I reached the supermarket area. The amount of food on display is quite something! 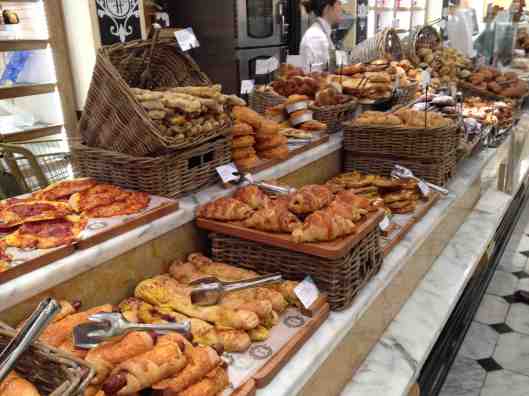 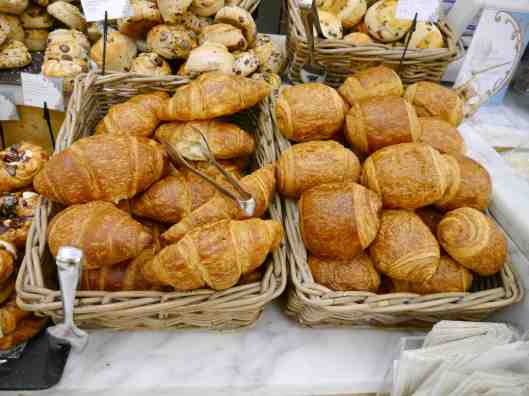 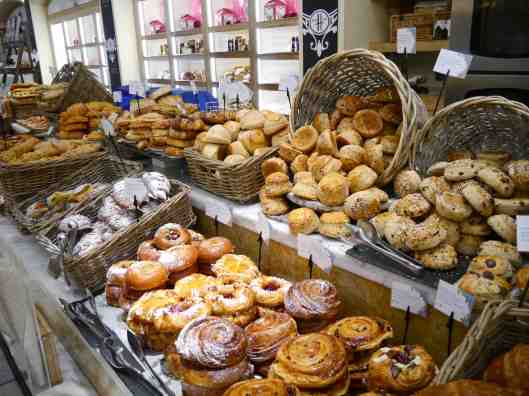 The variety of pastries is staggering. And the size of the pastries is quite stunning too! 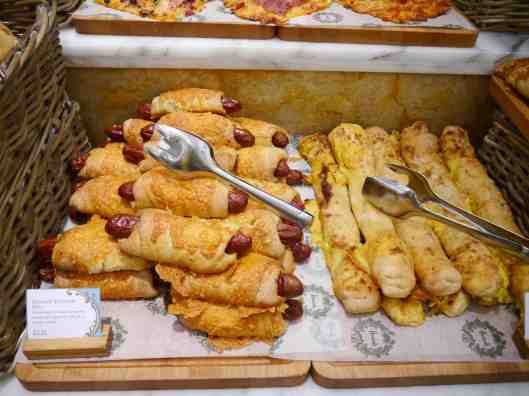 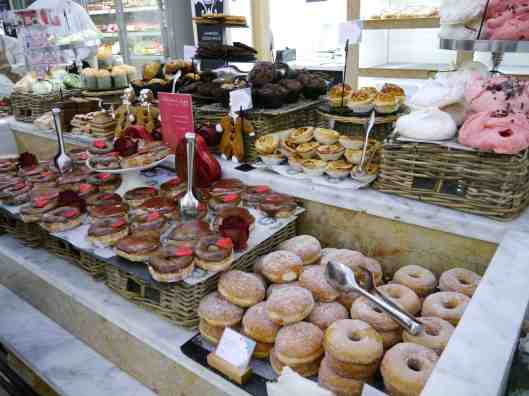 I was a tad hungry and got for myself a pain au chocolat. The pain au chocolat was big and the price was a bit high too. But you know what travellers are like? We would spend money that we normally wouldn’t spend back home. 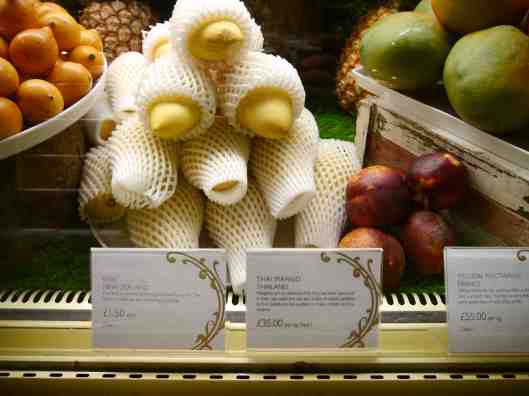 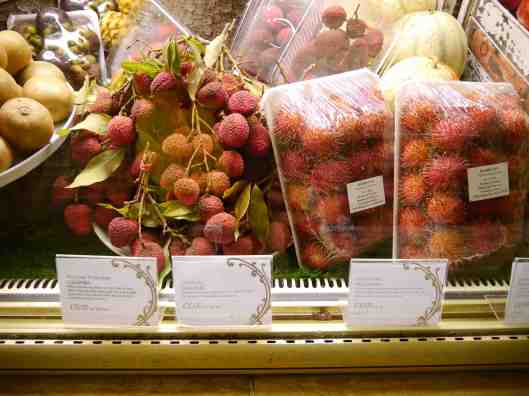 And the prices of lychees are crazy as well!! At that point, I feel really lucky to stay in Singapore and have access to all these yummy tropical fruits. 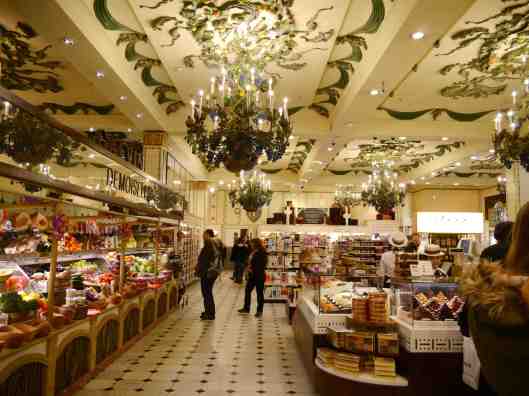 Well, it is so nice to shop in such surroundings! 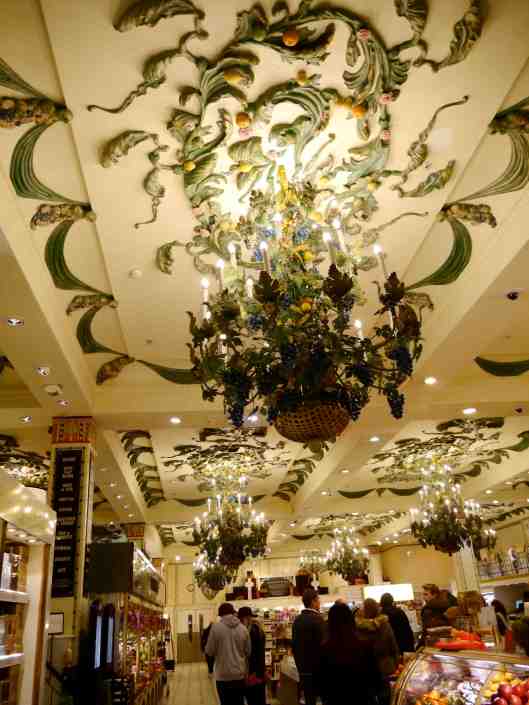 And then i walked into the seafood section. It is always nice to see the different types of seafood around in different parts of the world. 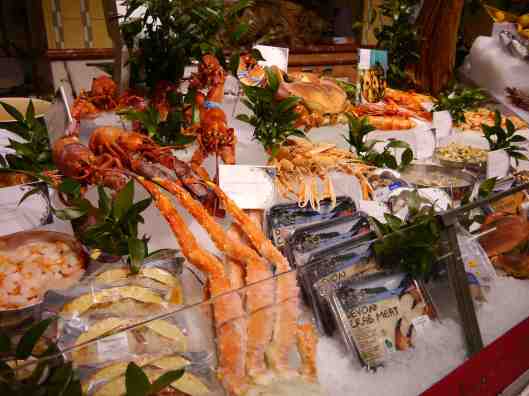 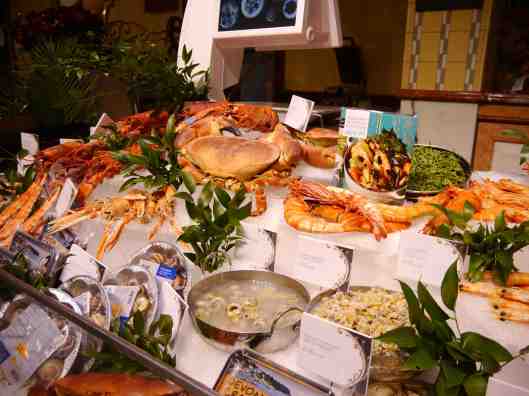 How I wish I had the luxury of time to choose what I want and savour the seafood. They all looked so fresh and delicious! 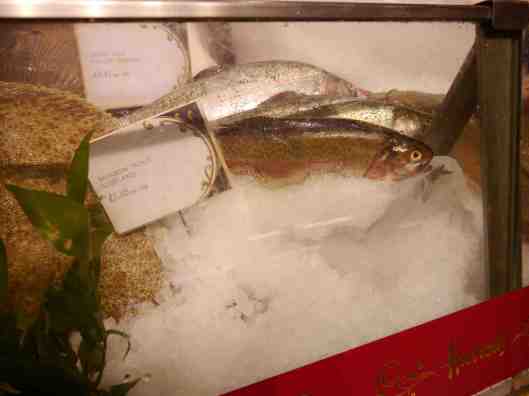 I believe this is my first time seeing a rainbow trout! I love anything that is rainbow!

And that was my quick tour of the food section at Harrods. I had a little time and went upstairs to see what Dior was up to 😛 Can’t help comparing Harrods to Galeries Lafayette and I still like Lafayette better even though it is a lot more crowded than Harrods.

And it was time to meet my friend and his wife. They were affected by the train station closure as well and were delayed. When we finally met, we decided to head to Paul and make a meal out of what was available there.

We got a little bit lost after alighting from the bus and after a few detours, we finally reached the train station. It was freezing cold , walking around in the streets. To be honest, I got a bit worried as I had aimed to be back at the airport about 2 hours before the boarding time as I had to collect the hand carry I left at the storage facilities. But I made it all in good time!

I was exhausted but I’m glad I caught a glimpse of London and met up with my friends, albeit it was a short meet-up.

And then it was time for my flight to Boston on Virgin Air. The one thing I remember about Virgin Air was ‘Wow, everything is so red’. Very vibrant but not quite my cup of tea. I can’t wait to reach Boston and finally end the journey, or rather, half of my journey.