So big day today! This time round, we went early to Roland Garros. Men’s finals was to start at about 3pm. We went to Roland Garros at sometime close to noon. Was a bit worried about the weather as it had rained all night in Paris and it was very cloudy all morning. We had to leave Paris the next day and if the match had rain delays, we wouldn’t be able to return to RG to finish the match. And of course, sunshine makes the tennis balls bounce better for Rafa. So I was very anxious about the weather.

Where do you want to go?

There was an excited vibe in the air! Music was being played by bands on the grounds. Its obviously not an ordinary day! 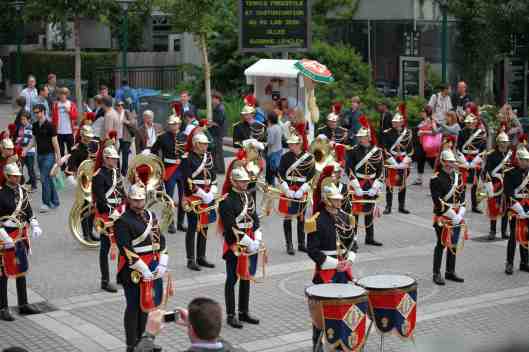 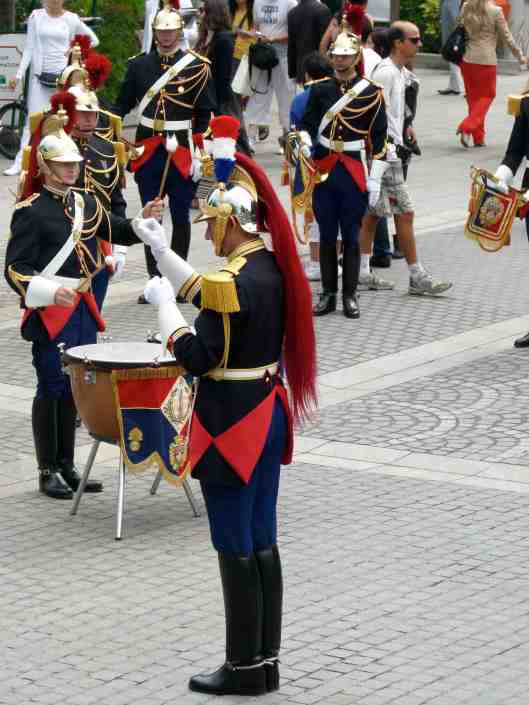 There was quite a big crowd and most came decked in their favourite players’ colours! They must be diehard fans of Federer!

So what do we do while waiting for time to pass? Have some cocktail of course! 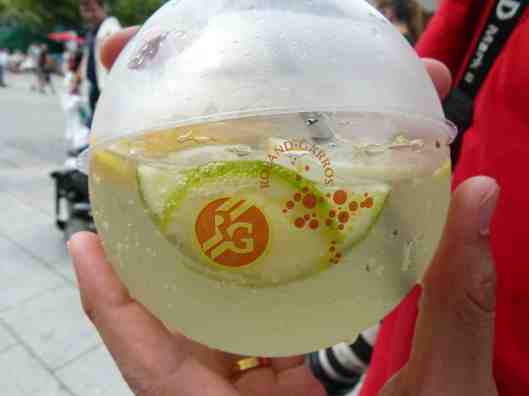 And we wandered into empty courts again. Oh beautiful clay! 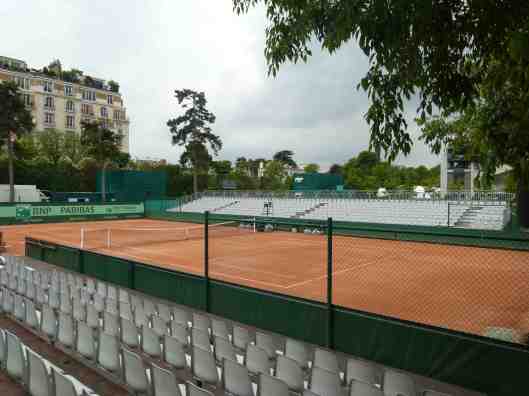 So we decided to go to Suzanne Lenglen where the Legend’s doubles were in play.

And there was the females legends doubles. Saw Martina Hingis, Lindsay Davenport, Martina Navrotilova and someone I’m not sure who. 😳 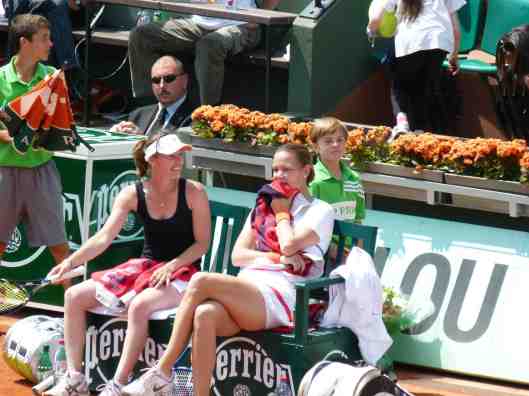 Hingis still looked to be in a very good shape and she was still playing very very good tennis. Although she might not be able to keep up with the current tour, she was still good enough to be in the professional doubles tour. It was great seeing Hingis in action live! 😛
Think Navrotilova was asking for the vibration dampener from Hingis.

From one Martina to the other

So time was creeping closer to the start of the men’s finals. So we went in search of the entrance for the tickets we held.

And it was still very cloudy!!

Cloudy day before start of finals

So what does a Harry Potter fan do? Cast spells to chase the clouds away of course! 😆 😆

So we entered the stadium and took our seats early. It was very nice to see Spanish fans with their ‘tools’!

And while waiting, I looked around and aim to go to the other 3 slams! But Wimbledon tickets are almost impossible to get while tickets for AO and USO are so very very expensive!

And the band to start the finals! Ah, so they were doing a final rehearsal on the grounds earlier on. I should have known! But they were easy to miss on TV when I needed to finish whatever I was doing so as to get prepared for the match. I like the music they were playing. Very familiar sounds to what came on the TV when I tuned in for the finals. The music suited the solemnity (but not that solemn) of the occasion very well. 🙂

Band starting off the match formally

And the players (great players at that!) took the court.
Bonjour Mr Federer! 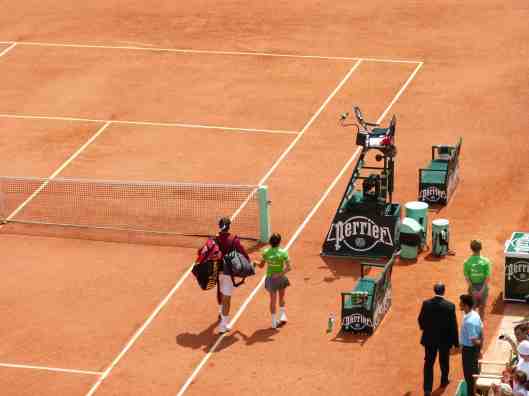 Please chill his bottle for him, s’il vous plait. 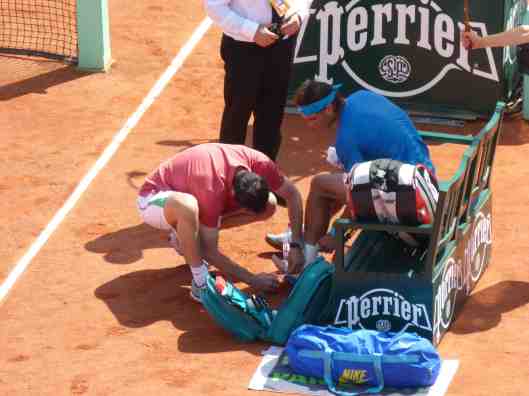 Loosening the tape on the foot

Fans who love Rafa and Federer 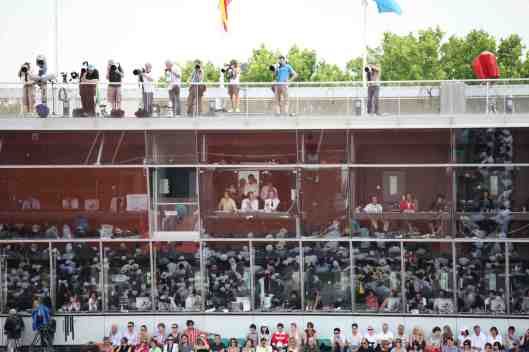 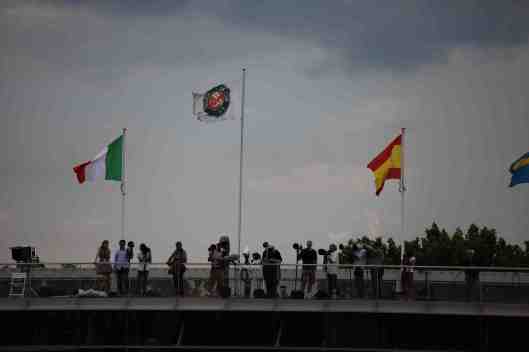 So then there was a very brief rain delay where the players moved off court and some spectators got out of the seats. But most of us, the savvy ones 😎 , stayed put and huddled under whatever shelter we had brought along in anticipation of rain. 😛
And then play resumed shortly. Yeah! 😀

Check out the bend of Rafa’s body

And then Federer took the 3rd set! Well, the crowd didn’t get as hyped up as they did during the semis when Federer had a chance of winning. But I suppose they were happy that Federer managed to take a set of Rafa, and it made for a more interesting finals. Well, it wasn’t that the match wasn’t interesting. There were good shots but the match was nothing like Wimbledon 2008.
Well, most of us expected more from Federer after he got that 3rd set but then hey, he was against the best clay courter ever! And then Rafa stormed back to take the 4th set and the championship!
Very quickly, the match was over! 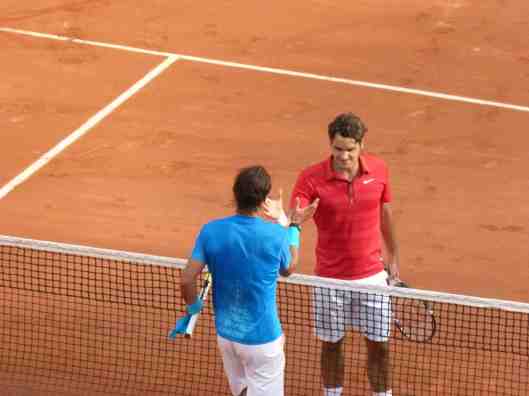 The pleasure is ours when Rafa and Fed plays

And I’d finally witness a Rafa victory live!! And at a grand slam no less! 😎

Happy for the win! 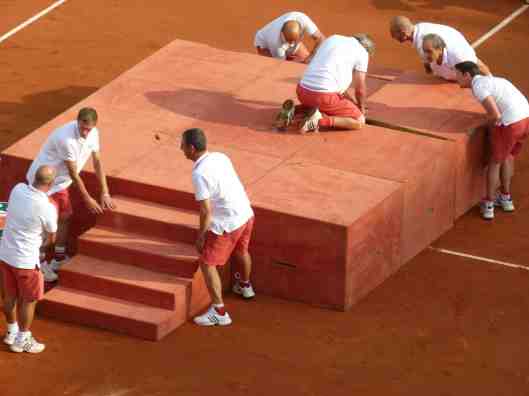 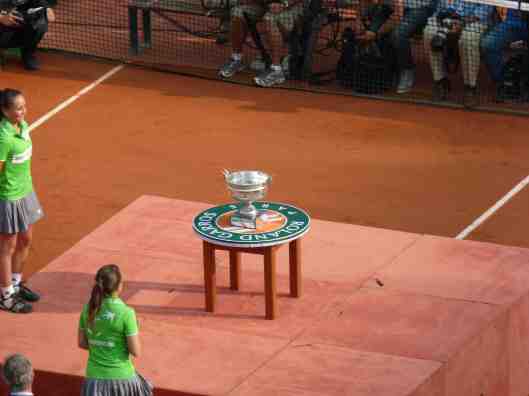 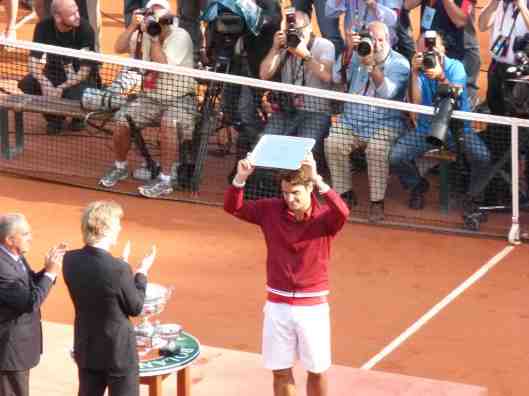 With the trophy presenter, Jim Courier.

Hope there will be some trophy biting this year (2012) at Roland Garros too! 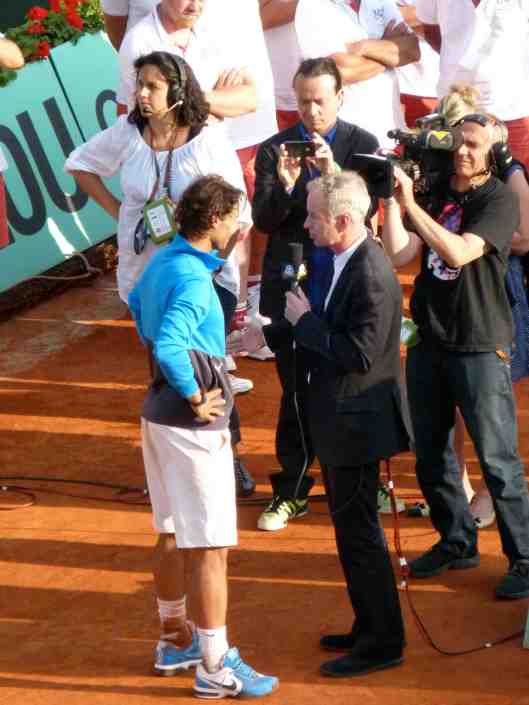 Getting his beloved España’s flag

More than 1 flag for the champ

And Rafa’s always so nice to his fans and their requests! 🙂 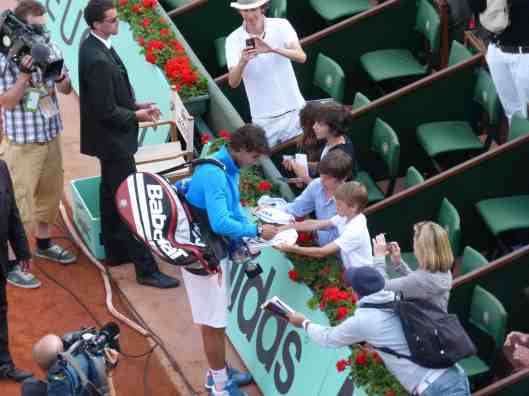 So we thought maybe Rafa would finish his media commitments within 2 hours. There was a crowd waiting for Rafa to turn up and the crowd never thinned out. It was just so nice to see fans willing to hang around for a glimpse of Rafa. But I think the wait took over 3 hours because by the time Rafa turned up, the sky was turning dark, and sun set in Paris is about after 10 pm during June.

Before Rafa turned up, we saw his family leaving about an hour before him and we all got so excited upon seeing them cos we thought Rafa would turn up just after them. Well, we were wrong. 😳
We contemplated whether to continue waiting for Rafa after the 3 hour mark. We were reluctant to leave in case Rafa comes out soon, and we would miss him if that was the case.

As the sky turned dark, clouds also gathered and we wondered if everyone wondered if our wait was in vain and if Rafa had somehow left by another exit. And my husband wondered if Rafa would be nice to us, the waiting fans. You see, the Li Na incident left a mark. But I told my husband, there’s no way Rafa would do that. He is one of the players who is nicest to his fans.

And then finally Rafa emerged in an orange shirt! Initially, he seemed a bit surprised that there’s still quite a big crowd waiting for him still. But he quickly overcame that and he placed his tennis bag into the car and headed towards the crowd, SMILING! 😀 Rafa is so awesome! The crowd of course started screaming his name but amidst the shouting, there were words of ‘Felicidades’, ‘Congratulations’, ‘I love you Rafa’ and ‘Te quiero’. And Rafa really tried his best to give as many autographs as possible. I managed to get his autograph, thanks to a very nice tall guy next to me. You see, we chatted while waiting for Rafa to show up and we made a pact that when Rafa turned up, as soon as he got Rafa’s autograph, he would help me get mine. Because Rafa would be on elevated ground while we were on lower ground. And with my height, and taller people around me, it would be tough to get an autograph. I’m very thankful to that nice guy from UK! 😀

Initially Rafa starting autographing with a smile but his smiling face very quickly gave way to a face full of concentration. He was really fantastic with the fans! Love this guy to the max! He must have spent like 10-15 mins signing and when he left, he waved goodbye with a smile. Lovely that was! 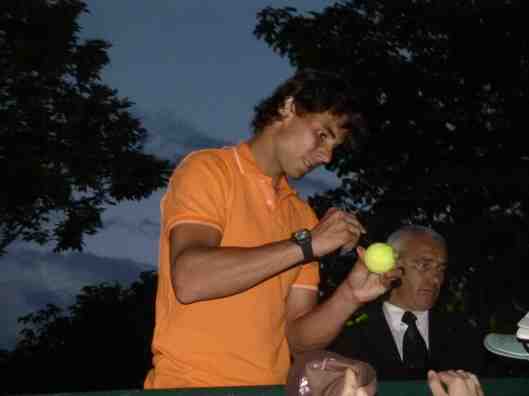 Doing all he can for his fans

Doing all he can for his fans

And as we departed from RG, it started to rain!! Phew, at least the rain held away until Rafa left! MY husband said Rafa was so nice to entertain the fans. I could tell my husband was really impressed with Rafa and even though we had to go without dinner apart from an apple, we were very happy. 😀